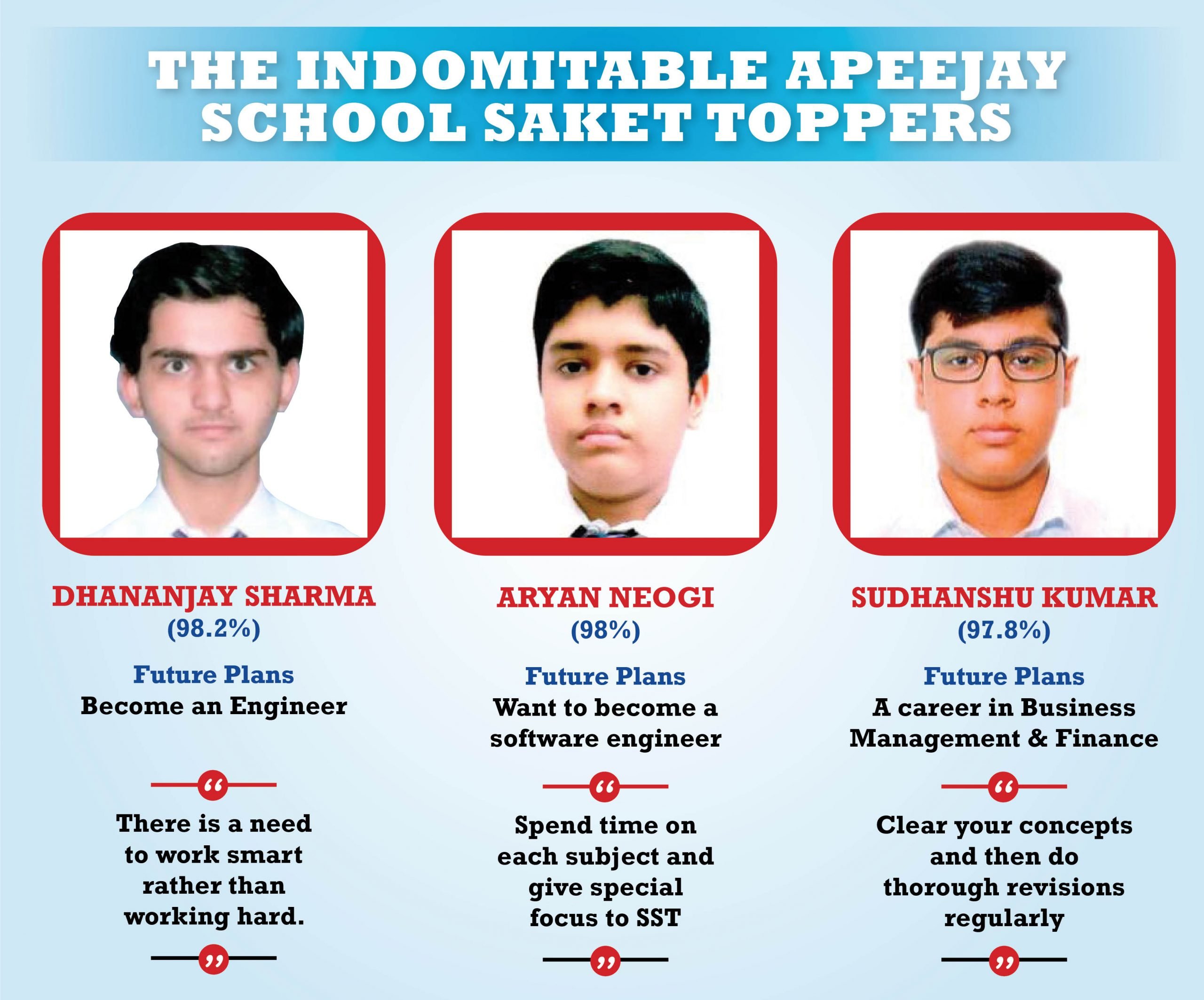 Thanks to the additional efforts put in by the teachers, students of Apeejay School, Saket and the backing of their families, aced the Class 10 exams with panache.

Covid-19 survivor Dhananjay Sharma, who has been raised by a single parent, topped the school with 98.2% marks. Unfortunately, Sharma had to appear for a few subjects during his pre-board exams online while he was down with Covid-19. But his mother’s constant support gave Sharma the strength to fight the battle.

He scored a perfect 100 in both Mathematics and Social Science, 98 in Science, 97 in Sanskrit and 96 in English. Sharma gives credit to his teachers for his perfect 100 scores.

“Reenu Ma’am was my History teacher and Beena ma’am used to teach us Geography and Economics. Beena ma’am used to provide us extra classes and hand over notes to us. It really helped students. Reenu ma’am made us solve sample papers along with the provision of notes.  My maths teacher Zeina Ma’am taught us to be a consistent performer. She made us learn to focus on the goals,” Sharma said.

Talking about his battle with Covid, he said, “I had appeared for my pre-boards of Sanskrit and Social Studies offline and then the schools were shut owing to Covid. After taking my Sanskrit exam, when I returned home I noticed some physical symptoms. The test report confirmed that I was positive. Eventually my entire family got infected. I live with my maternal grandparents and my mother is a teacher in Uttar Pradesh. She returned home to become my support system. By then the online pre-boards were announced while I was still recovering. My mom gave me a choice to drop the examination, but with her support and affection I decided to take the examinations as they were online. I gave three exams—Maths, English and Science — online.”

“I gave emphasis to NCERT books, note making and then solving as many sample papers as I could. I devoted 40% of my time to studying Social Studies, as it was a vast subject,” he said.

Aryan Neogi scored 98%, making him the second highest scorer in the school. He scored 99 marks in Mathematics, Social Studies and Science, 97 in French and 96 in English.

“I had kept my focus on Social studies as the subject syllabus is huge. As I was taking coaching to prepare for engineering exams, my science and maths were well taken care of. I devoted the rest of the time to English and French,” he said.

“Making notes, revisions and solving sample papers was my study technique,” said Neogi, adding that on Saturday and Sunday he used to study 8-9 hours and did three hours of self-study on the other days of the week.

Even Sudhanshu Kumar, who secured the third position in the school by scoring 97.8%, is a Covid survivor. He gave his last exam online in high fever. After the examination, he got himself tested only to learn that he had been infected by the virus.

Kumar scored 99 marks in Social Studies, Mathematics and Science and 96 marks in English and French each. Sharing his experience of attempting the exam while he was ill, he said, “My last examination was Science. A day before the exam, I was suffering from high fever. My body was very weak and I had a severe headache. I was unable to dedicate the entire time to revision but since I had already prepared for the exam in advance, I knew I would be able to take the exam. Even on the day of the examination, I was down with fever but somehow managed it. Later in the evening, I got myself tested. My mother was also infected.”

Talking about his success mantra, Kumar said, “I mainly focused on the NCERT books, cleared all my concepts and in the final round I used to solve a lot of sample papers, do revisions thoroughly.”

“I used to study for 4-5 hours in a day, but I made sure to dedicate more time to the chapters in which I was weak. Then the notes given by the coaching and the school teachers helped me a lot,” he concluded

“The success streak has begun for the preparation to face the challenge was truly inspiring and encouraging… Wishing all the very best to the young achievers… God Bless!”

Asst Editor ( Newsroom ), who has an experience of a decade in core journalism. Credibility, courage, timelines and media ethics are some of her professional traits.You can reach her at: [email protected]

FIFA World Cup 2022: Portugal vs Ghana: An evening of suspense