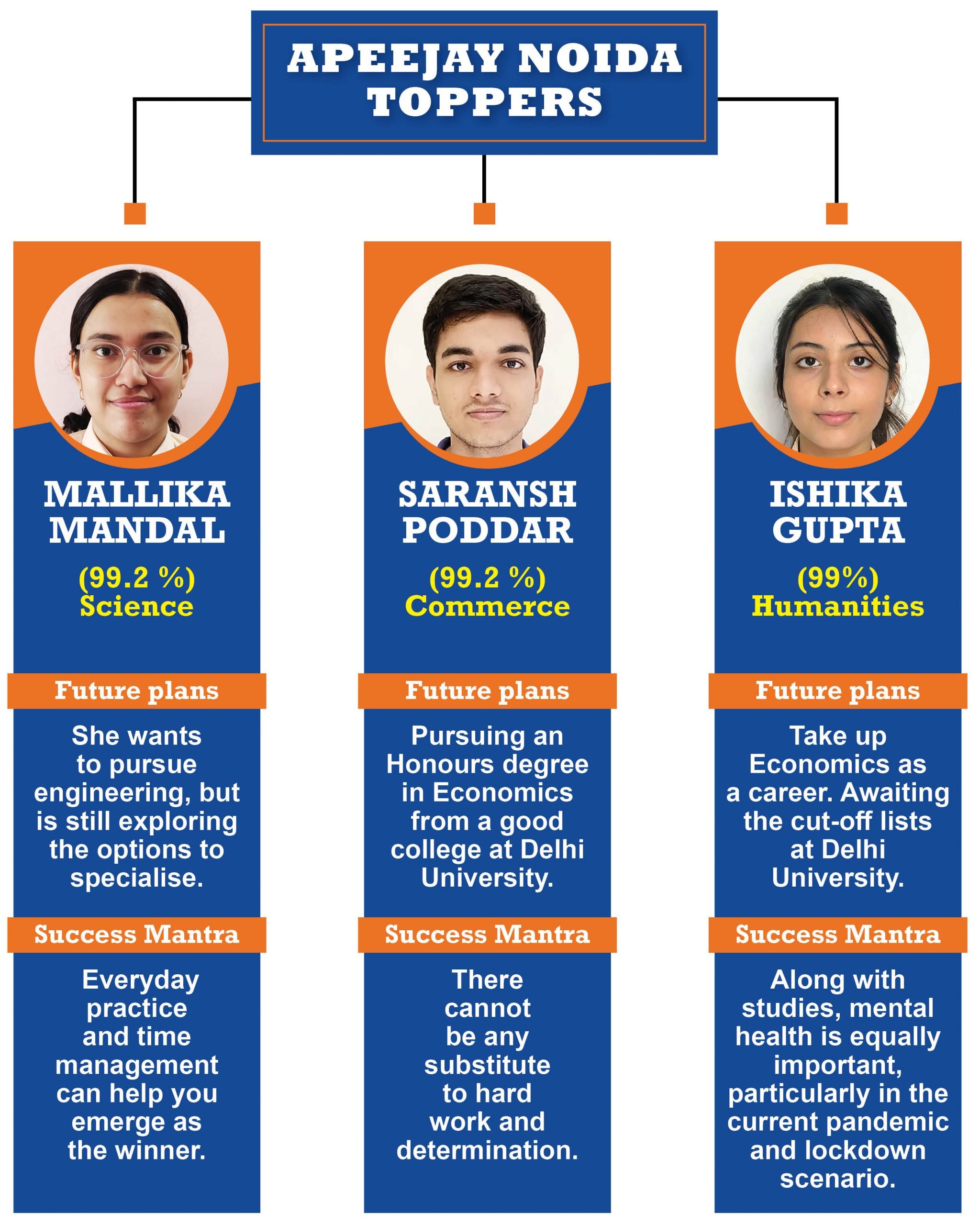 He didn’t let daunting odds owing to a pandemic and a tragedy in the family deter him. Covid survivor Saransh Poddar (19) emerged as the class 12 topper in the Commerce stream at Apeejay School, Noida with a score of 99.2 per cent.

Earlier this year, the pandemic claimed a victim in young Saransh’s family, when his father died of Covid-19. It was a tough time for the family, but Saransh says his family and school came to his support in dealing with it.
“My entire family, including me, was affected by the virus.  But teachers at Apeejay Noida proved to be my support mechanism at this hour. My class teacher Puneeta Bhasin is a very nice person. She has been in touch with us throughout. She used to practice meditation and recommended the same to me. It really helped me. She is also in regular touch with my mother. They both exchange motivational messages,” he explains.
The outstanding CBSE AISSCE Class XII results of Apeejay School, Noida, for the session 2020-21 are yet another affirmation of the academic excellence of the students of the school. It has once again set new records in academics, in consonance with its past performance.
Of the 237 students who appeared for class 12, a staggering 115 students have secured 90% and above in aggregate.
Mallika Mandal has topped the Science stream in the school with a score of 99.2 %. Mandal says she was surprised when the results were announced as she had focused more on preparing for her engineering entrance examination than on her CBSE Boards.
She told Apeejay Newsroom that her class 12 journey was on similar lines as class 11. She wasn’t fazed by the thought of appearing for a Board examination. Mandal secured an impressive 100 marks in English, Chemistry and Mathematics each. She got 99 marks in Economics and 97 in Physics.
Revealing her success mantra, Mandal said: “Practice every day. Each day is equally important. Along with this you need to learn time management. These were the two things that became my study technique.” She pointed out that owing to online classes, no note making is being done by the students, which can be a potential setback. “I used to make exhaustive notes and later do the revision. My study technique didn’t change in online classes. I adopted the same technique that I used to follow in the offline classes.
Commerce topper Saransh Poddar scored the cent per cent score of 100 in three subjects – Economics, Business Studies and Accountancy — and 98 marks in English and Mathematics each. Recalling the rigorous schedule that he followed to prepare for the Board examination, Poddar said: “I used to practice Math and Accounts a lot and picked up the Mathematics guide book written by RD Sharma on weekends. For the rest of my subjects, I followed a certain schedule and revised the main chapters.”
Ishika Gupta, who topped the Humanities stream, scored a perfect100 in Economics, Psychology and English. She scored 98 marks in Mathematics and 97 in political science.  Her aggregate, thus turned out to be 99 %.
Recollecting her module of self-study, Gupta said, “I used to study in short intervals. After every 1-1.5 hours, I used to take a break and chill. I watched TV or relaxed in my free time. I ensured to take proper care of my health. My parents made sure that I was eating right. Still, I made sure to study for at least 4 hours every day.”
Gupta has some very innovative tips for those looking to do well in humanities in class 12. “Revise the syllabus, write down the answers instead of orally doing it, as it helps in analysing more syllabus. Doing a lot of sample papers will help you explore a wide variety of questions. It also helps in self- assessment. Follow a regular pattern for self-study. Make a time table and stick to it. Also, focus on your mental health and well-being,” she elaborates.

“This excellent result is a manifestation of the sustained academic prowess of the brilliant students over three years, and a stellar embodiment of the collaborative efforts of the visionary management, diligent students, dedicated school faculty and ever-supportive parents.”

Asst Editor ( Newsroom ), who has an experience of a decade in core journalism. Credibility, courage, timelines and media ethics are some of her professional traits.You can reach her at: [email protected]

Gods in the sky

‘Do not bunk mentoring classes in college’