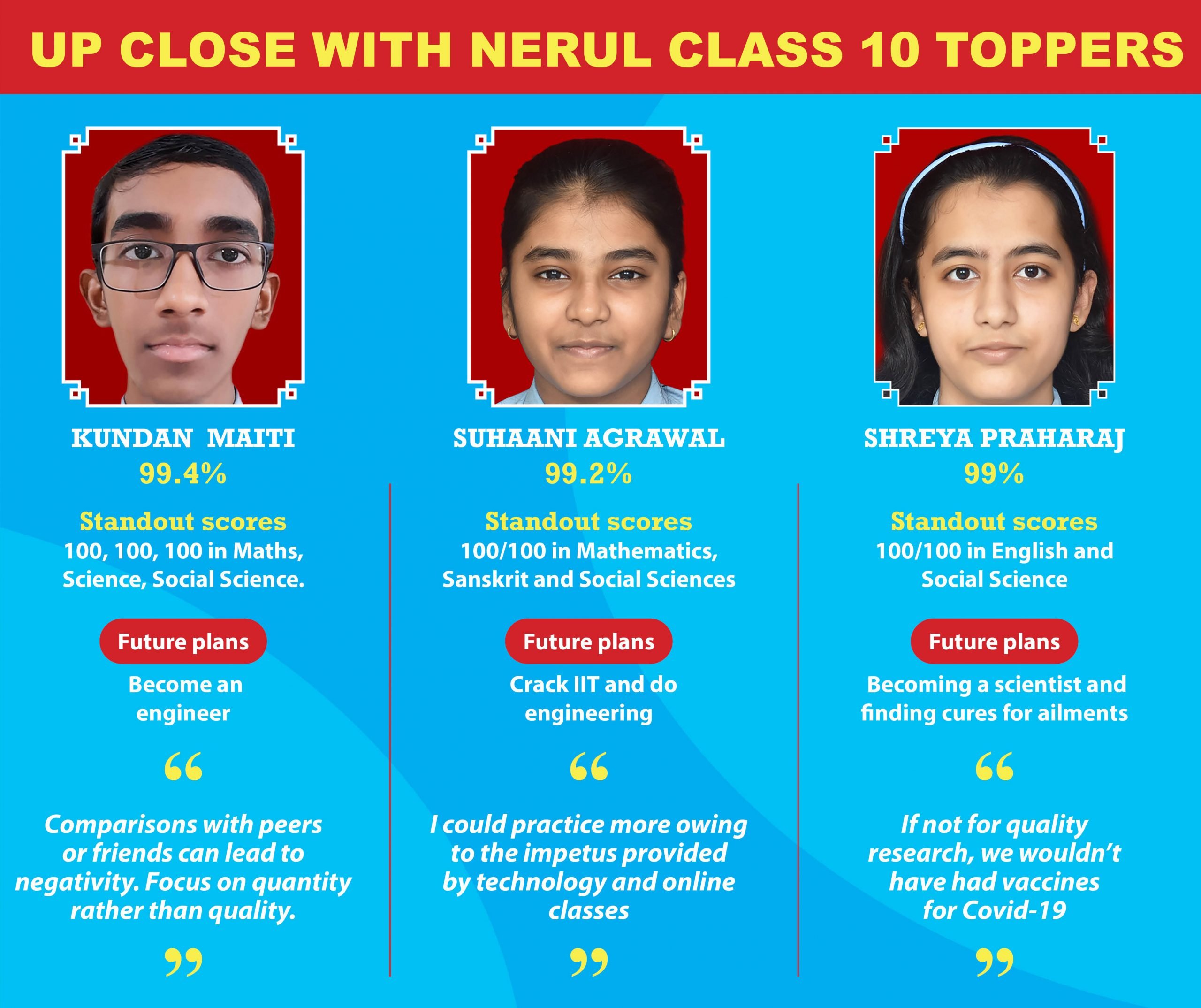 Even Apeejay School Nerul, topper Kundan Maiti was himself taken by surprise by his chartbuster performance in the class 10 Boards.  Out of the 49 students who secured 95% and above in the CBSE exam Maity emerged as top of the pops with a staggering aggregate of 99.4%. With marks of 100, 100, 100, 99 and 98 in Maths, Science, Social Science, English and Hindi respectively, he effectively lost just 3 marks out of 500.

Maiti loathes comparisons with his friends or peers. Asked about the mantras behind his success, he says. “One must work hard from the beginning of the Board year and be consistent with self-study. But I feel one should not compare oneself with one’s peers or one’s friends. That can lead to a lot of negativity in my view. We must study to acquire knowledge and not merely marks,” he elaborates.

In class 11,  Maiti has gone in for a Physics, Chemistry, Maths and Computer Science combination in the Science stream. “My father is an engineer and so is one of my cousins. At the moment I haven’t finalised on the kind of specialisation I want in my engineering. Maybe it could be aerospace engineering,” he says. Well, if his soaring scores are any indication, the sky’s the limit for this student.
The biggest drawback of the ongoing Covid-19 pandemic, says  Maiti, is that it curtailed interaction with his classmates and friends. “I am not active on social media and don’t use a personal mobile phone. So, in the online mode, my interaction with my friends and schoolmates was reduced to a large extent,” says the class 11 student who isn’t much into sports and plays the violin in his spare time.

Suhaani Agrawal who got an aggregate of 99.2% got the triple joy of securing a cent per cent score of 100/100 in Mathematics, Sanskrit and Social Sciences.  Agrawal  says she has a penchant for numbers and has always enjoyed solving mathematical equations. “I have been scoring well in Mathematics for a number of years now. Sanskrit is another subject where one can score prolifically with a little bit of effort,” says  Agrawal . She says she had to put in a little bit of additional effort in social sciences to secure cent per cent marks. “In Social Studies one needs to understand the concept really well and learn the answers thoroughly. Of course, one must be consistent in self-study,” elaborates  Agrawal .
In class 11, in keeping with her proclivity for mathematical subjects and a scientific bent of mind,  Agrawal  has chosen a Physics, Chemistry, Maths combination along with Computer Science. “My father is an engineer and I am tremendously inspired by my cousin who has done his engineering from Indian Institute of Technology Madras,” she reveals. “I will prepare for the joint entrance exam for the next two years and try to crack IIT Bombay because I believe it is the best IIT in the country,” adds  Agrawal.

Shreya Praharaj, who secured an aggregate score of 99%, scored 100/100 in both English and Social Science. She also secured 98 in Mathematics and 97 in Science. Ask her the secret of securing spectacular scores and she attributes it to everyday practice. “More than anything else it is practice. Our school was able to immediately move to the online platform when the lockdown was announced. After that it was constant practice that helped me do well in subjects such as English, Hindi and Social Science. One does well in Hindi or English when the answers are perfect. Which is why when you can practice more owing to the impetus provided by technology, you can aim at great grades,” explains Praharaj.

Going forward Praharaj has gone in for a Physics, Chemistry and Biology combination in class 11. “Although medicine is also an option for me, I would like to pursue ‘Core Sciences’ and carry out research as a scientist in disciplines such as Biology and Microbiology,” she says. “This appeals to me particularly in the aftermath of the worldwide pandemic and influenced my choice of stream to a great extent. If not for quality research we wouldn’t have had vaccines for Covid-19. The pandemic has made the world realise how much we need scientists and researchers. But for them, the world would have been in turmoil,” points out Praharaj.
Now this is one smart choice, which has the potential to help humanity.

“The Class X result at Apeejay School, Nerul, is a clear reflection of the consistent and dedicated hard work of the staff and students.  Our toppers worked diligently throughout the year,  and their brilliant scores are a testimony to it.”

Aasheesh Sharma is a seasoned journalist with an experience of more than 25 years spread over newspapers, news agencies, magazines and television. He has worked in leadership positions in media groups such as Hindustan Times, India Today, Times of India, NDTV, UNI and IANS. He is a published author and his essay on the longest train journey in India was included in an anthology of writings on the railways, brought out by Rupa Publications. As the Editor of Apeejay Newsroom, he is responsible for coverage of the latest news and developments in the Apeejay institutions. He can be reached at [email protected] He tweets @Aasheesh74

An insightful interaction with the marketing expert

‘I trained for more than six hours a day’