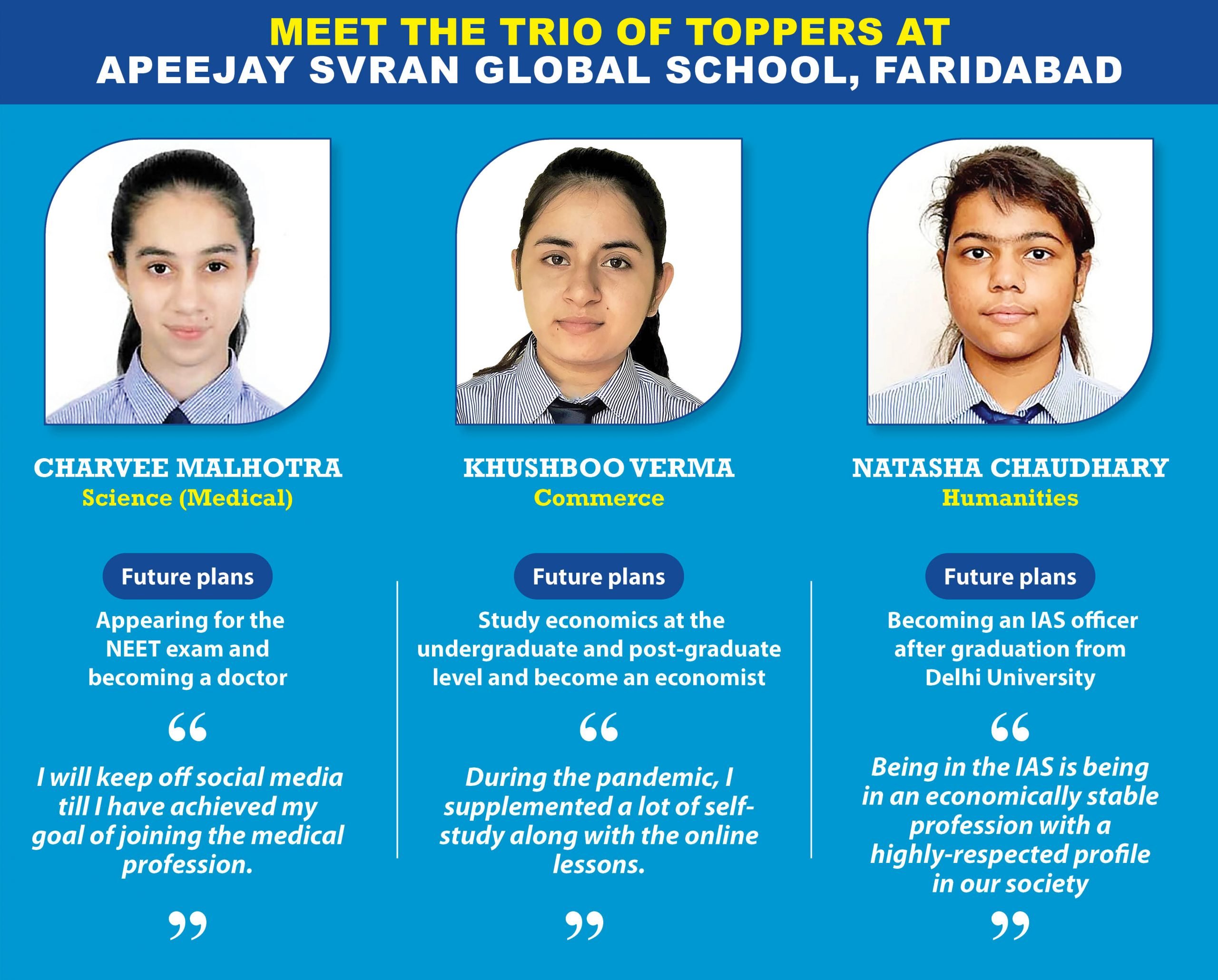 Charvee Malhotra, the Science topper at Apeejay Svran Global School, says she felt inspired looking at the images of doctors stepping out of their comfort zone, risking their own lives during the Covid-19 pandemic. “No wonder, the entire nation, including our Prime Minister, anointed those on the frontline of the fight against the pandemic as Covid warriors. It strengthened my resolve to join the noble profession of medicine,” says Malhotra, who topped the Medical Science stream.

Going forward, the daughter of an NGO worker and logistics professional wants to become an anaesthesiologist. “I feel an anaesthesiologist executes a very crucial task of providing medication to patients so that they do not feel pain while undergoing surgery. Since my childhood, I was always fascinated by Science and now looking at the respect that Covid warriors evoked, I am determined to become a doctor,” she told the Apeejay Newsroom.
Malhotra, who is preparing to take the common medical entrance test NEET next month, says she would continue to keep off social media till she achieves her goal. “I think the variety of social media options available to teenagers in our cities can be a major distraction, particularly in a crucial year when one is preparing for one’s class 12 Boards.”
Inspired by her mother, who runs an NGO which works in the field of sustainable waste management, Malhotra says each of us has to play a role in the fight against climate change and global warming. “Being eco-friendly must be inculcated at an early age in the country.”

Humanities Topper Natasha Chaudhary has set her sights on becoming an IAS officer. Her first priority, she says, is getting into a good college at Delhi University. “I would prefer to either do an Honours degree in English literature or study psychology at Delhi University. Side by side, I would continue to prepare for the Union Public Service Commission exam. In the eventuality that I don’t get a college or course of my choice, I would still want to pursue my graduation through Correspondence but keep preparing for the civil services exam,” she says.
Why is she so focused on a career in the Indian administrative service? “Well, for two reasons. One, it is an economically stable profession with a highly respected profile in our society. Secondly, it can help you get enormous job satisfaction and the satisfaction of having done something for society,” she replies.

Apeejay Svran Global School Commerce topper Khushboo Verma wants to pursue Economics at the undergraduate as well as post-grad levels, she says. “I want to get into an honours course in Economics at Delhi University. My dream professions include those of an economist or a civil servant. I have grown up wanting to make a concrete contribution to society. Since both my parents are teachers, I would be the first in the family to venture into these domains,” says Verma.

Verma says that she augmented the online classes during the pandemic with a lot of self-study. “For Accountancy, I relied on solving as many questions as I could a number of times and for Economics, it is better to take exhaustive notes and write everything down to enhance one’s retention,” is her tip for those who want to do well in class 12.

“The destiny of hard work is always success! Our students have worked incredibly hard and we know their hard work has paid off.  We congratulate them on their marvellous success! Good wishes and good luck for all their future endeavours.”

Aasheesh Sharma is a seasoned journalist with an experience of more than 25 years spread over newspapers, news agencies, magazines and television. He has worked in leadership positions in media groups such as Hindustan Times, India Today, Times of India, NDTV, UNI and IANS. He is a published author and his essay on the longest train journey in India was included in an anthology of writings on the railways, brought out by Rupa Publications. As the Editor of Apeejay Newsroom, he is responsible for coverage of the latest news and developments in the Apeejay institutions. He can be reached at [email protected] He tweets @Aasheesh74

‘The management staff is so cordial at Apeejay School, Greater Noida’

‘Self-introduction indeed plays a vital role in an interview process’

How to choose a career in the field of law?